The New York Finger Lakes region IMCP Community, led by the city of Rochester, was one of 12 communities that was designated based on the strength of their economic development plans, the potential for impact in their communities, and the depth of their partnerships across the public and private sectors to carry out their plans. 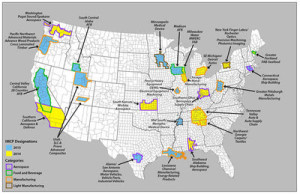 On September 27, Commerce Secretary Penny Pritzker announced that the community, along with 11 others, was redesignated for an additional two-year term.

The benefits of the program are being felt widely in the region.

For example, with a $110 million seed capital investment from the Department of Defense to help the region recover from the loss of Kodak, the AIM Photonics has attracted $1.4 billion in private sector dollars and created 800 manufacturing jobs just a year after launching.

In addition, in August 2016, Commerce Secretary Penny Pritzker announced that EDA would award $2.6 million in grants to High Tech Rochester, Inc., to establish a business incubator space in a city-owned building. This project is estimated to create 100 new startup businesses and 1,000 new jobs within the first five years of operation.

We help high-growth startups find and apply for non-dilutive funding. Schedule a consult call with us HERE.

error: Alert: This is protected content and belongs to E.B. Howard Consulting.